You can’t just take the subway. Something has to be awry.  Maybe the heat is on in the car in the middle of July.  Perhaps you got on in the wrong direction and end up in central Harlem at an obscure hour of the night.  Or maybe you end up sitting next to that creeper who just has to talk to you about nothing for the duration of the trip. It’s never just a ride to a destination. Here begins the happy chaos.

I was so tired when I got on the train it really didn’t matter what was going on or how crowded it was. I was basically asleep, on my way to 14th street to a Japanese hair salon. Luckily Soo (roommate) and I got seats in a standing-room only car. As we headed downtown on the 6 from SpaHa, I couldn’t imagine the UES stations providing anything but mundane embarkation. And then abruptly he entered the train. With a bang.

He couldn’t have been the typical homeless money-seeker, you know the kind that give a speech about their life and end it with tears. Or the kind that lie across the seats with a stench that prevents others from being on that side of the car. Or even the kind that sits and plays a bongo with a cup for change. I like them. Nope, not this guy.

Purposely slamming some sort of metal box contraption on the floor as he made  his way toward our section of the train car, he had the attention of everyone on board. At this point people were more confused than scared because most people have seen just about everything. So they took that look in his eye–that something was about to go down–as a challenge. I was scared. So I put my feet up on the seat until he settled in the space between the two doors.

The metal box popped open into a magician’s table. The plastic hat he had on wasn’t something he found, it was his costume. And soon enough the entire half of the train car became his stage, whether we liked it or not.  His Gimmick: shoving tricks into people’s minimal spaces. Pimping out his long metal collection basket like we were all in church. And the grand finale was the release of a dove (or white pigeon) into the train and back into its box.

After this display of events, I will never be able to appreciate those simple people with a cardboard sign and a tin can. 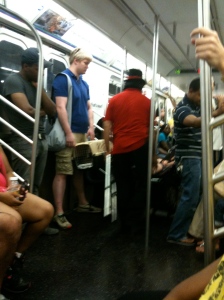 One response to “the magic of NY subways”